I tried the SliTaz Linux distribution.

Advantages: Iso file only takes up 30Mb; boot is fast; good selection of programs in default despite small size of distribution; program-loading occurs at lightning speed; interface is decent.

Cons: Unable to make wireless work. I tried loading the module for my wireless card, as per instructions, but with no success.

However, should I be able to enable wireless, the distribution will be perfect for its class. I might install it on my mother's old laptop as an alternative to Windows, which is riddled with problems and gives me an enormous headache.

I encourage you to have a look at the SliTaz distribution. http://www.slitaz.org/ (Also see Youtube videos if you want it see it in action).

Downloading it and trying it out on USB is easy! 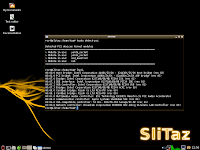 Posted by Robert Buckmaster at 8:12 PM No comments:

The subject of this post might seem incongruous with that of this blog - but I can scarcely contain myself, I'm so excited. Passing by a house, I stopped at a garage sale, prominently displayed in front of which was a type-writer - a 70s model, by my estimation. It had a blue case, and gave a good punch on your pressing the keys. I didn't hesitate at buying it - for only $15.

Instantly my imagination opened up to all the uses to which I could put this new machine. As a writer, I could lug it around to cafes or parks, then write documents in the sunshine. The simultaneous word-processing and printing would make for fast and effectual proof-reading - editing a document from an LCD screen will not do for my exacting standards. Moreover, I shan't have to worry about finding an external printer, and friends'can instantly see what I've been working on - on paper!

The machine sounds great, doesn't it?

You needn't worry about power supply or finding power points to which the machine will be connected - the typewriter rather is human-powered. Nor does the machine know anything like booting-up time, not that this is a problem on a Linux machine.

A happy side-effect perhaps is having a vintage chic accessory that people shall gape at. Oh, I am filled with glee!

A for Puppy Linux, I am still happy with it, but I should like to see my task bar again, which disappeared when I was tinkering with themes on my desktop. The touchpad configuration isn't working either; but you can't have everything, I suppose.
Posted by Robert Buckmaster at 9:36 PM No comments:

Taking Puppy for a walk

In my last post I described the somewhat involved process of setting up Puppy. The difficulty in configuring this lightweight distribution doesn't lie in the lack of tools - on the contrary, Puppy is well-equiped; but interpreting it is another matter. For instance, in setting up wireless, after pressing the 'Connect' button on the desktop, I was fooled into clicking on the symbol that looked like wireless instead of that with the text 'Connect to network or LAN' - after all, it wasn't a LAN I wanted, it was wireless. In short, all this is to say I was silly enough to press the wrong button. Wireless now connected, I was away surfing the internet. My first victory.

Making the sound work was another challenge. According to ALSA sound wizard, the native program which configures your sound card, everything was working fine; the problem was at my end. But all the same, I couldn't hear anything when I played mp3 files. Back to the web then for a solution.

Sound cracked - headphones and speakers not playing at the same time - aha! Here it is! No sound. Some chap on the forum had the same complaint as I. Scrolled down, I found the solution. Open up a menu, click a few buttons there, turn up the volume - everything was in order now. So I played 'Pauvre Lola', a cover of Serge Gainsbourg. Everything fine.

Next problem was how to make the sound come out of the headphones, not just the speakers. And that is not to mention a host of other minor problems - well, they shall be settled in due course, but not in this post.

Otherwise, I am very happy with Puppy; it performs as advertised. Fast, lightweight. It has made for a happy user at my end - and there is much tinkering to be done, including installing the premium-quality programs from various repositories - that is, the places where you can download anything you want.

I'll describe more about Puppy anon - is it a coincidence that it is a dog-day afternoon?
Posted by Robert Buckmaster at 9:48 PM No comments:

Puppy won't come out and play

For a while I've been itching to play with Puppy Linux, a lightweight distribution which runs fast and works well on legacy machines. There were, however, problems.

My first step was to download the ISO of Lucid Puppy, which has all the files needed for installation. Next I created a Live USB, that is, one which allows you to boot into Puppy from any computer with the USB docked - after you tell the BIOS you want to boot from the USB and not the hard drive, if it hasn't already so made up its mind already.

On my booting the machine, however, no Puppy operating system was to be seen. But the solution was merely a matter of putting in a command to the terminal, 'sudo apt-update GRUB'. This allows you to choose Puppy when booting up. So, on my next boot, the choice of operating systems appeared, although it called Puppy 'Unknown Linux operating system'. Well, I know what that is, even if my computer doesn't!

And voila! The Puppy system was right in front of me. However, on attempting to connect to the internet, I ran into trouble. The system didn't detect my wireless card, and I've no idea how to configure it. One can't get very far without a connection.

So I am waiting for someone in the Puppy discussion forum to lend me a helping paw. Then maybe Puppy and I will take a walk into the sunset and play ball.
Posted by Robert Buckmaster at 1:01 AM No comments:

There are some impressive desktop themes employed by Linux users -- I present the following as examples. See for yourself if there is anything for Mac OS or Windows to compare with the wizardry possible in Linux.

Perhaps one of the themes below will be to taste -- if not, you can create your own! 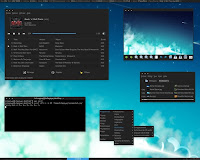 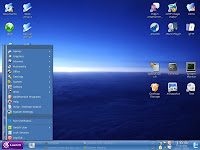 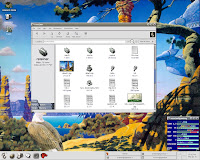 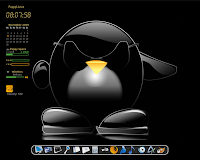 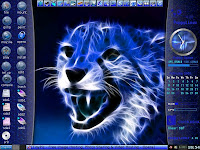 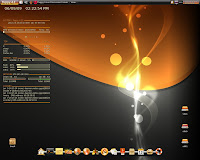 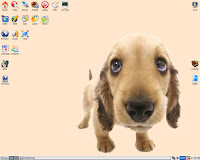 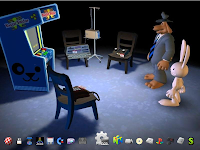 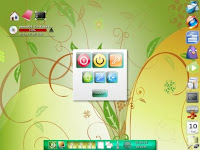 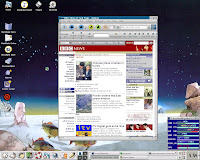 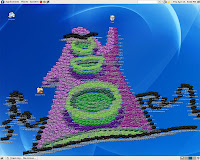 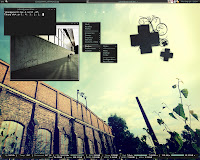 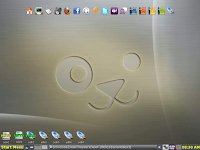 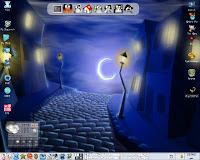 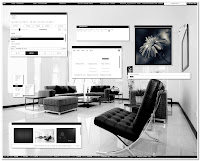 Posted by Robert Buckmaster at 10:29 PM No comments:

Chers lecteurs: I re-read the Linux wikipedia article in French today -- which is good for practising the language, the text being very long. But one thing struck me as interesting, dubious though it might be: a reference to a French article written by a fervent Linux-advocate enticed me to read on. In this article, the French Linux crusader cheerfully champions the choice available respecting pre-installed operating systems on PCs sold in Argentinian department stores -- a virtually unheard-of circumstance elsewhere. He shows photos of Linux computers.

But in a later article, he laments this choice's disappearance in this same country. All PCs destined for consumption would only be pre-installed with Microsoft -- the latter decided to reclaim market share, using its time-honoured ham-fisted method. Subsequently, an Argentinian company which had sold its own brand of Linux pre-installed computers sued Microsoft. The case is still before the courts. Well, so much for choice.
Now, if one buys a computer without intending to use Microsoft, one may still, in theory at least, reclaim the expense for pre-installation of any Microsoft products (the installation always being mandatory as per the secret agreements Microsoft has with manufacturers). This expense is known as the Microsoft tax. The process of reimbursement, however, is lengthy and tedious. It is not for the feint of heart, and should only be done on principle, since the $100 and something dollars thus reclaimed hardly justifies the year (or at minimum a few weeks) of to-ing and fro-ing with the computer's manufacturer. All the same, there is a body in France representing those wanting to reclaim this tax - set up by our French author.
I was thinking, maybe there might be a guerrila way of marketting Linux (which is almost always free, Red Hat being an exception). Well, as it happens, PCjacking is one such way. http://www.manucornet.net/pcjacking/ On this website a mad Frenchman recounts his going to retail stores and secretly making display computers run Linux with a Live CD (using the Knoppix distribution). The computers themselves are not affected, since the operating system runs off the CD and RAM, and not the hard-drive. The author shows us a few photos of computers so 'jacked'. And he leaves CDs around the shop with a message to passers-by that they needn't spend the rest of their lives condemned to use Windows. By such a stunt, he is protesting the lack of choice in his country. And his article presents an alternative situation in Argentian, ignorant of the aftermath.
Anyway, piqued by this article, I found, through a Google search, an article by a student who had 'jacked' a university computer, and another by an IT expert advocating using Live CDs on public terminals -- that is, 'jacking' them -- for security reasons. Yes, security: for Microsoft systems may be compromised by evil programs recording your activity and sending the data to third parties -- think about that next time you do your eBanking at an internet cafe.
So the idea in my previous post wasn't a novel one -- though I certainly didn't know anything about 'jacking' at the time.
Which brings me to my conclusion. Here is some Linux fun, in video form. Enjoy.
http://www.dailymotion.com/video/x1y7uw_linux-fausse-pub_shortfilms (Linux Penguin Tux brings dead computer back to life)
http://www.youtube.com/watch?v=SpOlcm-X9cc (Tux meets a robot)
http://www.youtube.com/watch?v=GDSpP405O00 (Tux meets the MSN butterfly in the ring)
http://www.youtube.com/watch?v=RThvuhjDH0g (Tux is saved by the faulty programming of Microsoft)
Posted by Robert Buckmaster at 5:03 AM No comments:

On some machines you've no choice but to use Internet Explorer -- this one, for instance. The circumstance is an annoying one, for there are many features of Firefox, or Chromium for that matter, which are unavailable on Microsoft's version.

On the sly I downloaded Firefox on this computer; but its installation was disabled, for running '.exe' files, including that of the Firefox set up, was blocked by the 'administrator'. As Internet Explorer is the standard browser on many machines, one has to put up with it, dunce program though it is.

However, I had an idea, not yet tested, that might allow me to use my preferred Linux operating system, secretly if you will, so that I might have my way without effecting changes to the host computer -- the idea: use a Live USB. That is, I would install Linux on a USB stick, bundled with my programs and files, and run it on public machines like this one; I should only have to reboot. Everything would be swell. But perhaps the person in charge of the computer would take a dim view of my freedom -- such people restrict access to everything in order to minimise harm, not caring about my chagrin.